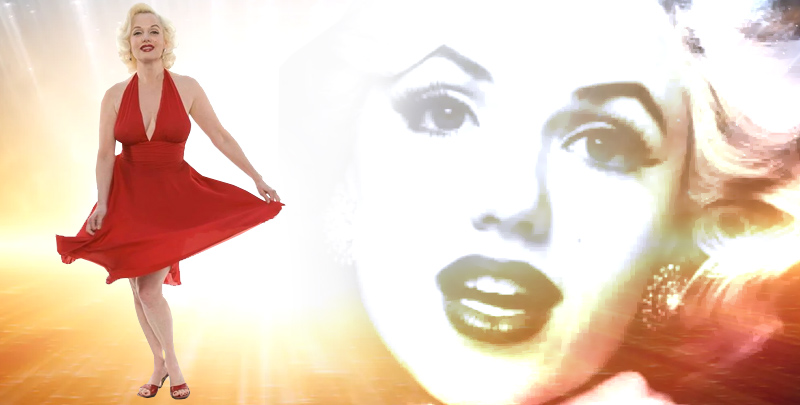 Anyone who looks unbelievably similar to an A-list Hollywood star would get noticed. However, the ones who look exactly like a globally renowned actress would certainly be at an advantage. This is exactly what happened with actress Susan Griffiths. Over the course of her decades-long career, she made a name for herself as a Marilyn Monroe impersonator.

This American television film was released in 1991. It showcases the life of an American writer called Robert Slatzer. He claimed to have married Marilyn Monroe on the 4th of October 1952 in Mexico. There’s no proof that this wedding actually took place.

Slatzer had said that he met the iconic actress when she had just started acting. In the film, their secret affair goes through several ups and downs. This is mainly owing to the circumstances Marilyn finds herself in while balancing her career and her love life.

Written and directed by Quentin Tarantino, this neo-noir black comedy crime film was released in 1994. It starred John Travolta, Uma Thurman, Samuel L. Jackson, and Bruce Willis. The film narrates several stories of crime in Los Angeles. Quentin Tarantino had written this film in 1992 and 1993.

The title of this film refers to the crime novels and pulp magazines popular during the mid-20th century. They were known for their punchy dialogues and graphic violence. Pulp Fiction won the award for Best Original Screenplay at the 67th Academy Awards.

Dark Skies is an American science fiction television series based on the UFO conspiracy theory. It made its debut on NBC in September 1996 and ended in May 1997. The series had a re-run on the Sci-Fi Channel. Owing to the massive success of The X-Files on Fox, NBC was interested in commissioning the series.

It was pitched by the producers’ Brent Friedman and Bryce Zabel. In October 2007, it was announced that Dark Skies would be made available on DVD. This was the result of many years of fan campaigns. The series was finally released on six DVDs in the United States.

This American television sitcom ran for seven seasons spanning 166 episodes. It was created by the television producer and writer, Neal Marlens. Growing Pains made its debut on the 24th of September, 1985 on ABC.

For the final season, a new cast member was added. It was the homeless teen Luke Brower, which was played by Leonardo DiCaprio. This sitcom is about the Seaver family, which resides in Huntington, New York.

Starring Scott Bakula as Dr Sam Beckett, Quantum Leap is an American science-fiction television series. It was originally aired from the 25th of March 1989 to the 5th of May 1993 on NBC. Dr Beckett is a physicist who leaps through spacetime while conducting his experiments in time travel.

One can find an excellent mix of drama, humour, romance, science fiction and social commentary in Quantum Leap. In 2007, it was ranked 19th on TV Guide’s ‘Top Cult Shows Ever.